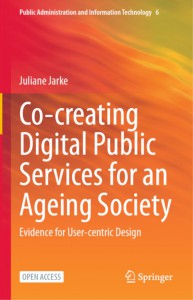 My new book is out & open access. It reviews stereotypical (mis-)conceptions about old age & technology (design), and proposes a methodology for more inclusive and participatory public sector innovation: Co-creation.

Here comes a short summary of each of the chapters.

Introduction: There is an articulated need to engage older citizens in the design of digital services, but a lack of evidence concerning successful participation approaches. This book addresses this gap by reporting from three co-creation projects with older adults conducted as part of the EU-funded MobileAge project.

The 2nd chapter reviews dominant discourses about ageing societies and technological innovation. It argues that engaging older adults in design processes can reconfigure how and which imaginaries of old age and “successful ageing” are being scripted into technologies.

The 3rd chapter reviews key literature and concepts relating to the co-creation of digital public services: (1) Co-production of public services, (2) CoDesign and (3) civic open data use. It considers what kind of e-services may be suitable for co-creation.

The 4th chapter introduces MobileAge, the project upon which the book is based. It presents the project’s framework and methodology along seven streams of activity. A canvas describes the co-creation processes and outputs (e.g. with respect to sustainability & maintanance).

The 5th chapter reports on a project in the city district Bremen Osterholz in which a core group of 11 older residents co-created a digital district guide. The chapter describes co-creation methods such as cultural probes and data tables. It concludes with lessons learned.

The 6th chapter reports on a project in the city district Bremen Hemelingen. Co-creators defined design requirements and created content for a digital walking guide. The chapter describes different kinds of walking methods such as ideation walks, data walks and user test walks.

The 7th chapter reports on a project in Zaragoza that was facilitated by Zaragoza city council. The focus was on the improvement of an age-friendly city infrastructure. The result is an enhanced map service, which allows (older) citizens to report problems and/or propose improvements

The 8th chapter presents nine learning points from the three co-creation projects. It considers to what extent the openness of a co-creation process impacts on the sustainability of its results and the ways in which co-creation contributes to joint socio-technical future-making.

The final chapter concludes that co-creation processes are highly contingent and dependent on several factors. The learning points identified provide evidence on ways to co-create better, more user-centric public services with and for older adults.