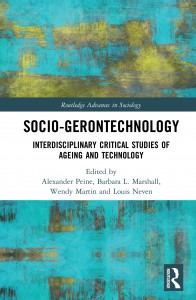 The interdisciplinary Socio-Gerontechnology Network attends to questions of the use and design of gerontechnologies from a critical social science and design perspective. The network has now published its first edited volume: Socio-gerontechnology – Interdisciplinary Critical Studies of Ageing and Technology, which brings together perspectives from ageing studies and science and technology studies. I am have contributed a contribution with Andreas Bischof (Technical University of Chemnitz) which is entitled: Configuring the older adult – How age and ageing are re-configured in gerontechnology design. The chapter will be available open access in due course.

Chapter abstract: Later life has become one of the most prominent topics for the design and development of digital technologies, resulting in the creation of a large body of prototypes and products (gerontechnologies). However, the majority of these efforts suffer from a lack of empirical grounding of their imaginaries of ageing and later life while also failing to involve older adults in design processes in meaningful ways. This chapter reviews how age and ageing can be configured across different instances of the development and deployment of digital technologies. We understand such design processes as configuration practices that co-construct older users and later life. By using the concept of re-con-figuration, we critically reflect about conceptual, ethical and pragmatic challenges of involving older people in design processes.